The Arise Triangle of Strength

The Arise Triangle of Strength 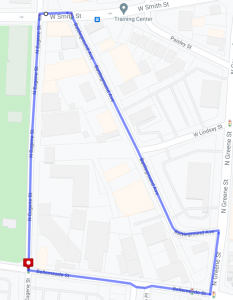 Norwood recalled from geometry class that the triangle is the strongest shape. Therefore he devised a workout using cutting edge google technology to identify a triangle in the area using the urban landscape. Each point of the triangle represented a designated fitness focus that included arms, core and legs. A gentle run to each location provided an aerobic cleansing of worn muscular tissue between locations.

Side Straddle Hops with a combination of Sun Gods and Chinooks proved to be sufficient for waking the pax up on this mildly humid 70 degree morn. Norwood then led the pax to a crushing five minute Imperial Walker slog to the tune of Baba O’Riley by The Who. Norwood was not sure how the news of such a long stint of coordinated thigh gyrations would be received but was pleased to hear exclamations of “Hip Hip Hooray!” or “Praise You Norwood!”. Some of the pax remained silent but with hands on their hips, betrayed a smile as if to say, “If that Norwood is not a rascal and a scallawag then I don’t know what one is.

The pax then proceeded to the 1st station located at the steps of the celebrated Greensboro Grasshoppers stadium. After each exercise, pax departed to the next station

Announcements
• Welcome back Popeye!
• Congrats to all pax from new guys and Bachelors like Ricky Bobby who make it out regularly
• Nancy and his 2.0 will Qing Wakanda
• Goldan Corral is Qing Slammin Sammies with weights tomorrow
• Norwood Debut’s his Tribute to F3 video titled Keep Yourself Alive. Subscribe to his You Tube page to stay tuned.