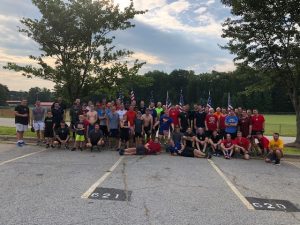 It was a cool, low humidity morning when the PAX gathered in the Gloom of Northwest High School. But that only lasted for a second. Virus had timed the sprinklers perfectly for one of the three pain stations so everyone could stay hydrated. Little did the PAX know what was in store. The Nordic Tract AO provides so many options. The F3 mission statement and disclaimers were delivered and we set off on the shortest mosey in F3 history.  This is what followed:

The Pax counted off by 3’s.  Group 1 followed Snowflake to the hill, Group 2 followed Virus to the now very damp field, and Group 3 followed Udders to the stadium. Each group spent ~12 minutes at the station and then rotated. YHC admits I had way too much fun blowing the whistle to indicate it was time to change stations. I had not done that for more than 8 years (my last time coaching youth soccer).

I. The Hill-(3-man grinder) – AMRAP until relieved

Jump Squats
Up Downs (high knees, 5 each leg, then hit the dirt – rinse and repeat)
Seal Jacks
Turkish Get-ups
Imperial Walkers
Crab Cakes
E2K (will be a repeat if we get that far)

Mosey rest of the way to end of field 5 burpees then repeat back across the field in reverse order (starting with Lt. Dan) until time is up.

Rinse/repeat until time is called

Details for the Labor Day Convergence will be available soon.