9 of the studliest PAX of greater #Natville denied the fart-sack and joined YHC for a little subterranean and superterrenean work out fun (with weights!). It all started with the discovery that no FNGs were among us, and followed with a declaration of the F3 Mission and disclaimer. Then it was time for…

We then gathered up our weights and took the stairs to P2 Level, headed to the back right corner of the parking deck and faced down the parking deck ramp known as “Bear Mountain”*, with courage and vigor. There was early consideration of pushing this giant brown dumpster up the ramp a couple of times, but cooler heads prevailed and we proceeded with the originally planned beatdown. 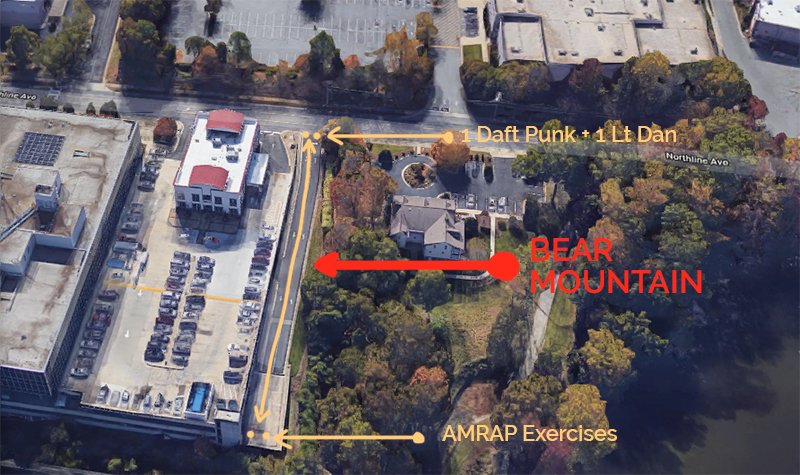 Here was the plan – break up into (2) teams of 5. Start with PAX doing AMRAP of listed exercise while one member from each team ran to the top of the ramp, performed 1 Daft Punk + 1 Lt. Dan and then ran back down to the bottom of the ramp followed by next team member and on and on and so forth and etc…. After (2) team members have made it up and down Bear Mountain*, switch to the next exercise**.

Both teams made it to Around the Worlds when Omaha was called. We completed 15 Flock of Seagulls and then gathered up our weights and headed back to the shovel flag for …

Announcements:
Community Housing Solutions was Saturday the 15th
Humpday Happy Hour has been re-located to Gibbs on State Street for June
Blood Drive is June 23rd
Continued Thoughts and Prayers for Gilligan #GilliganStrong

COT: Boone’s Farm led us out by lifting up Gilligan and his family, and other PAX that are struggling.

#TClaps to Boonie for posting with a bum wheel.
#TClaps to Mall Cop for solo EC Run

* This ramp probably isn’t really called Bear Mountain, but wouldn’t it be cool if it was?

**The PAX may have had some questions about the reasoning for switching AMRAP exercises after (2) runners instead of (1), but MumbleChatter aside, they all rocked it just the same.

*** Meet and Greet Merkins (not as fun as they sound)
Pax line up shoulder to shoulder with about a foot of space in between and then all Pax plank.

The Pax at the end of the line (Pax A) performs a half-circle plank until he is facing the Pax that was next to him (Pax B). Pax A performs 2 boo-yah merkins and exchanges “5” with Pax B who continues to plank.

Pax A then performs a side roll to end up in front of the next Pax in the greeting line (Pax C) and rinses-and-repeats these steps all the way to the end of the line.

Once Pax A gets past Pax C, Pax B does a half-circle plank and exchanges boo-yah merkins with Pax C and moves down the line in the same fashion. Continue until all Pax have gone through the greeting line.

Great work by all assembled! As always it was an honor and a pleasure to lead!