“It looked good on paper”

“It looked good on paper”

YHC has never Q’ed Northeast Guilford County’s Finest AO2, so when some spots opened up on the Q roster, he snuck in.

After the PAX came rolling in – including EC Runners (#TClaps) – YHC gave the disclaimer, including some details about not being a professional based on his “goofy-ass hoodie”.  After this, the PAX were off on a light mosey around one island of the parking lot, then circled back for…

The PAX then moseyed to the far end of the parking lot, lining up on the white lines for…

(Part I – Ladder of Smoked Shoulders3)

YHC has been itching to dish out this ladder on unsuspecting PAX.  The Exercise is as follows…

Around the second to last ladder, YHC realized that perhaps he’d bitten off more than he could chew, and admitted “It looked good on paper.”

Once all the PAX had finished4 , we began our journey… 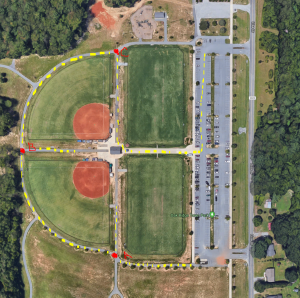 YHC planned three separate stations for doing Partner Flapjack work.  At each station Partner 1 runs half-way to the Snack Shack, performs a burpee, and runs back to relieve Partner 2, while Partner 2 performs the exercises on the wienke.  Each set of partners is responsible for fulfilling the requirements of the wienke before moving on.  The stations were set up as such:

The plan was to perform all exercises at each station, and make it back to the Shovelflag in time for Mary.  However, since the initial ladder set us back a number of minutes (#00ps), YHC called Omaha, and led the PAX back through the park to the Shovelflag, along with a Jailbreak at the end for good measure.  The PAX then circled up for…

YHC prayed us out.

As always – it was a pleasure to lead you men this morning.  Excellent work!